Moving From Notion To Slab: How Coder Found Their Ideal Knowledge Base

Coder had a knowledge-management problem. Although they used Notion for an internal knowledge base, not enough team members adopted it. They were intimidated by Notion’s complexity and frustrated that it didn’t fit into their workflow.

CTO and Co-Founder Ammar Bandukwala wanted a tool that simplified the documentation experience and integrated with his team’s existing toolset.

Slab is a focused yet versatile knowledge base product. Its sleek UI, powerful search functionality, and dozens of integrations made it an easy platform for Coder’s entire team to adopt and fit into their existing workflow.

Coder Enterprise moves software development to the cloud, centralizing an organization’s development initiatives and unlocking substantial gains in both developer velocity and enterprise security. Coder enables the developer to focus on writing code, providing access from anywhere, on any device, using the tools of their choice.

With over 15M downloads and 35k Github stars, Coder solutions are trusted by developers everywhere for rapid and secure innovation in any development organization, no matter how complex or regulated.

As Coder’s Co-Founder and CTO, Ammar Bandukwala was in the enviable position of having built a successful startup with 40 employees.

But as his company scaled, Bandukwala grew keenly aware of an underlying problem that could threaten Coder’s upward trajectory — they had no widely adopted knowledge management system.

It was a problem that, in his own words, “was slowly eating away at my soul.”

Coder tried to use Notion — but the result was a knowledge base riddled with gaps and fractures.

To Bandukwala, not having a strong internal knowledge base was the “number one product problem” for his team. So he embarked on a mission to find a platform that would unify his team’s scattered knowledge, simplify the user experience, and scale alongside Coder as the company grew.

He turned to Slab.

Why Notion wasn’t right for Coder

Many employees at Coder struggled to adapt Notion into their workflow. Bandukwala cites Notion’s product philosophy as the issue.

“It was like they were trying to rebuild tools like Google Sheets in the Notion way,” he said.

But the Coder team liked its existing toolset — engineers preferred storing README files in their git repository; managers were accustomed to using Google Sheets for their inventory lists. Bandukwala didn’t think his team should have to learn a new set of tools or adjust their workflow just to contribute to their knowledge base.

And while his team could still use their existing tools to store critical knowledge, integrating that knowledge into Notion wasn’t as fluid as Bandukwala needed.

Integrations knock down silos and simplify the documentation experience

For more than three months, Bandukwala searched for the ideal solution. Notion wasn’t cutting it. Confluence left him disappointed.

Then, a colleague recommended Slab.

“I blindly tried it out, and Slab satisfied most of what I was looking for,” Bandukwala said. “So, we very quickly made the switch.”

With GitHub Post Sync, his engineers can continue to store their documentation in their git repository, while automatically syncing these docs inside Slab, alongside the rest of Coder’s team knowledge.

“It was great being able to merge the knowledge base that we had in GitHub with what we had in Slab without it being a jarring experience for the user.” 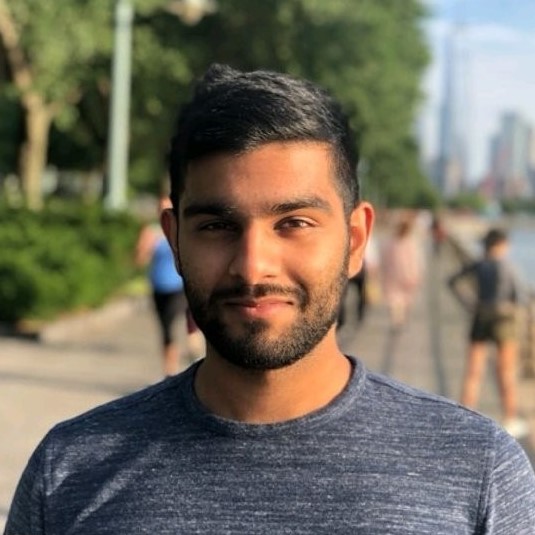 Slab’s integrations benefit others beyond Coder’s engineers. Most teams at Coder use Google Docs and Sheets regularly. With Slab, they can continue using the tools they’re familiar with, then embed that content inside Slab in seconds.

“The way I look at it is, if you want to make a Google Doc or a Google Sheet discoverable, you add it to a Slab post,” Bandukwala said.

Slab’s unified search feature allows Bandukwala’s team to search for content inside Slack, Google Docs, and Dropbox directly from Slab. They don’t waste time bouncing around a handful of apps and browser tabs to find what they need.

By using Slab, the content that Coder stores within these external tools has become even easier to find.

Most teams have stale and outdated content in their knowledge base. Outdated content can cause confusion and frustration. Bandukwala eliminates this confusion with Slab’s post verification feature, which requires specific posts to be periodically verified by their maintainer to ensure content is accurate and up to date. 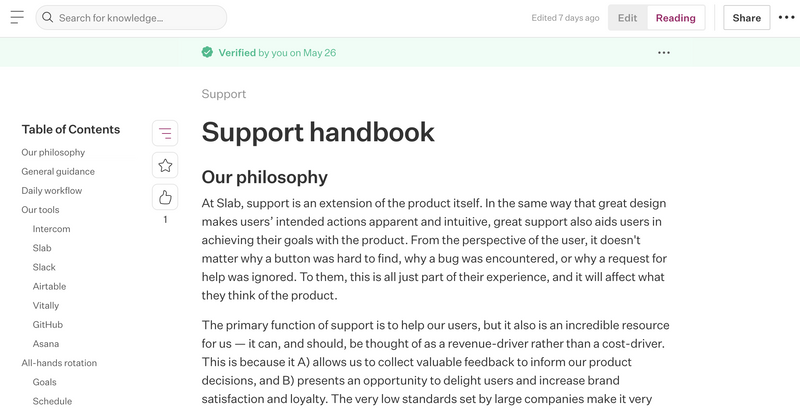 For example, Bandukwala periodically verifies a post he maintains that lists the specific laptops managers can buy for their team. Because Bandukwala verifies that post regularly, there is no room for misinterpretation. Managers know this list represents the company’s most recent policy on laptops.

As Coder scales, they rely on Slab to democratize its knowledge

When Coder used Notion, knowledge was fractured; documentation was an afterthought. Because Slab fit seamlessly into Coder’s existing workflow, knowledge sharing has evolved into a natural part of the team’s culture.

“If we have something written down and someone doesn’t read it, that’s a big no-no,” he said. “It’s understood that’s just wasting time.”

Coder would likely look and operate much differently if they didn’t have a strong central knowledge base like Slab, Bandukwala acknowledged. And he urges other software companies to invest early on in how and where they store knowledge.

“Your knowledge base platform is an important tool. Any software company that’s at about 20 people really needs to invest in it.”

Why Teamable Moved Their Documentation From Confluence to Slab

Finding A More Secure Documentation Tool That Teammates Would Actually Use