Teams are abandoning meetings to boost productivity. But the answer isn't zero meetings. It's silent meetings.

Meetings are incredibly unpopular these days. The phrase “meetings suck” doesn’t just have more than 8 million page hits on Google. It’s even the title of a book.

Meetings consume calendars. They disrupt daily agendas. They are one of the most common workplace nuisances cited by employees.

Companies have begun to wonder whether teams could be just as productive and collaborative without meetings. This thinking is particularly prevalent in the startup and tech industries. As Basecamp founder Jason Fried has said, “Meetings should be like salt — a spice sprinkled carefully to enhance a dish, not poured recklessly over every forkful. Too much salt destroys a dish. Too many meetings destroy morale and motivation.”

But the solution to a more productive workplace isn’t eliminating meetings. The answer is to embrace silence.

The problem with “vocal” meetings

Vocal meetings are the conventional meetings teams have, where typically three or more people gather and take turns talking.

Vocal meetings have their place in the workplace, particularly when person-to-person interaction is important. An example is a team-wide meeting designed to inspire employees about an upcoming launch.

But teams default to vocal meetings out of comfort and familiarity without considering the potential repercussions.

Research suggests, for example, that participants who engaged in a vocal discussion during brainstorming sessions produced significantly fewer ideas, of lower quality than those who participated in a silent meeting.

The more participants at these meetings — the more profound the differences in both quality and quantity of ideas.

There are several reasons why vocal meetings hinder idea generation:

In vocal meetings, one person speaks, then another, making it difficult for a productive exchange of ideas to occur.

For example, James is the facilitator of a meeting where he and four colleagues will brainstorm how to market the team’s latest feature. 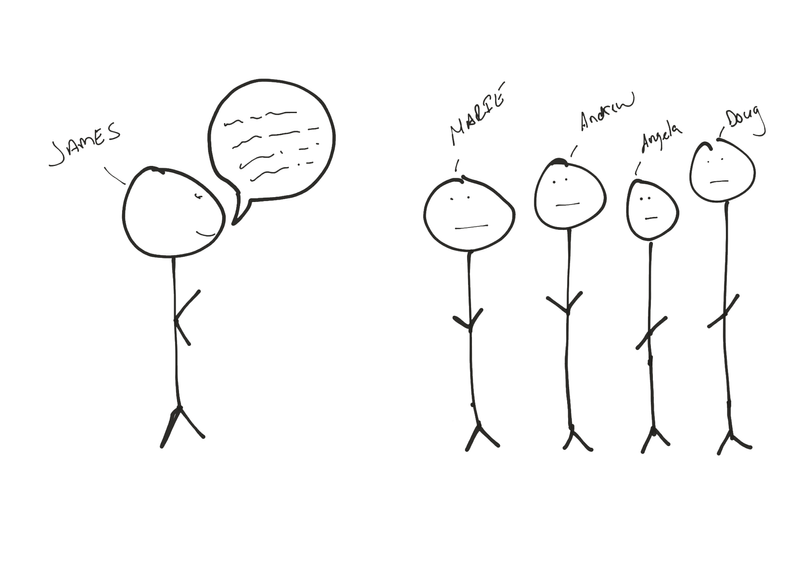 When James is done talking, Marie contributes her ideas on marketing, which unintentionally leads to a debate on whether the team should continue spending cash on Facebook ads.

Andrew has a lot to say about this topic, so he speaks up. Now the meeting has shifted focus to an area with which Angela has no experience. By the time she has the floor, the team is no longer talking about marketing the new feature, so she has nothing to contribute.

Her lack of contribution gives James, Marie, and Andrew, the green light to continue debating the value of Facebook ads. Doug has been entirely left out of the discussion thus far. As an introvert, he doesn’t interrupt. Besides, his views on how to market the feature contradict the ideas James shared earlier. And James has been on the team longer, so Doug is uncomfortable opposing him.

By the end of the meeting, Doug doesn’t contribute — at all.

How silent meetings make your team more productive (and happy)

Now consider how a silent meeting empowers each team member to contribute their ideas without the effects of production blocking or social pressure.

As the facilitator, James sends an email to his colleagues a week before the scheduled meeting, requesting they each summarize their marketing pitch in writing.

At the meeting, James hands out copies of each summary — having hidden the names of each colleague on these copies (anonymity can encourage more productive collaboration). The group engages in a silent table reading.

After the table reading, James asks his team to identify the main ideas presented in each summary. He then lists these ideas out on a whiteboard and asks his teammates to place a star under each idea they think is worth discussing. The result looks like this: 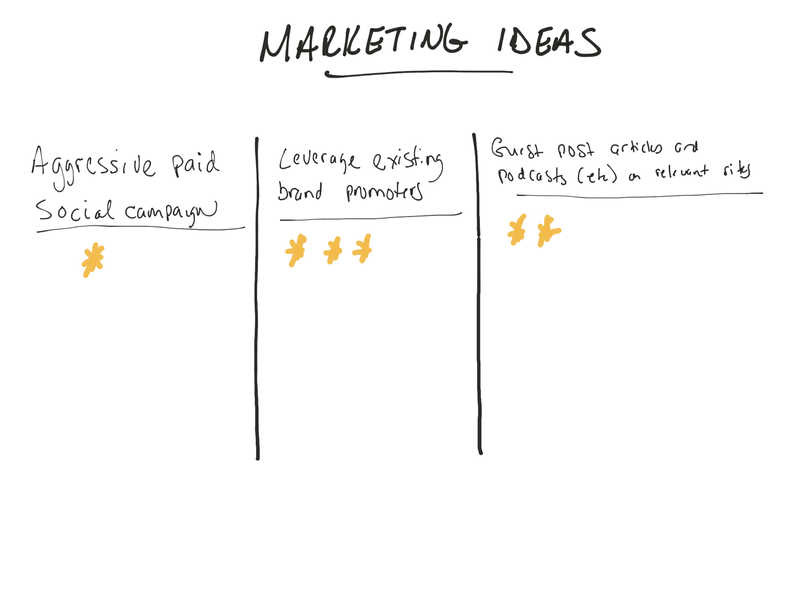 Tip: For remote and distributed teams, use a collaborative tool like Lucidchart for these brainstorming sessions.

James uses the outcome of the whiteboard exercise to prioritize the discussion portion of the meeting. The idea with the most stars is discussed first — and likely gets the most attention.

In this scenario, the meeting is broken up into three parts:

This silent meeting approach has precedence.

Jeff Bezos requires each member of his senior executive team to read lengthy memos before he opens meetings up for discussion. That way, they come to the meeting prepared. Companies like Twitter and Square have also adopted silent meetings.

Silent meetings eliminate production blocking by giving everyone equal time to share their ideas and process the ideas of their colleagues. They also remove the peer pressure and social humiliation some people experience in vocal settings.

“Attendees often hold back in meetings, waiting to hear what others say and what their boss might say out of fear of being perceived as difficult, out of touch, or off the mark,” write Steven G. Rogelberg and Liana Kreamer for Harvard Business Review. “Silence can be a solution to this problem, allowing space for unique knowledge and novel ideas to emerge.”

Silent meetings empower attendees to brainstorm and ideate on their own terms.

Using silent meetings at your workplace

The scenario we presented earlier is an effective use of silent meetings — where silence serves as a preamble to a more focused vocal discussion. If your team is new to silent meetings, this is the most effective approach to apply. It slowly introduces your team to the concept of silence.

You can also hold entirely silent meetings. Using our scenario above, James would not have held the vocal discussion with his team. Instead, that discussion would take place later on, in an asynchronous channel like email or Slack.

Embracing a full silent meeting can be a challenge for teammates new to the concept. We suggest easing them in, first.

When holding a silent meeting, use these guidelines offered by David Gasca as part of his Silent Meeting Manifesto:

“I’ve expanded Silent Meetings for my teams to make it our default approach. The largest forums in which I’ve used Silent Meetings are day-long 70-person planning sessions but I also regularly use them for meetings with 4 to 40 people.” — David Gasca

Adding silent meetings to your arsenal of options

Some meetings are unnecessary. For example, can the topic you intend to discuss at the meeting be resolved asynchronously? Then don’t call the meeting.

But when you do want to assemble a group of people in one place, at one time, vocal meetings are not your only option.

Silent meetings can empower your team to be more enthusiastic about brainstorming and collaboration.

Work Smarter
The Eisenhower Matrix: Prioritize Your Time on What Matters Most
Most people waste time on tasks that don’t inch them closer to their goals. The Eisenhower Matrix breaks you from that cycle.
Work Smarter
From Procedural to New Knowledge: Leveraging Your Team’s Know-How
Your employees develop new and valuable knowledge after mastering a skill. Here’s how to help them share that knowledge with others.
Work Smarter
Choosing and building an internal wiki for your company
How to choose, organize, and launch your company's internal wiki. A complete guide to setting your team up for success.
Enjoying the post? Get notified when we publish a new article.
Subscribe
Get notified when we publish a new article
Careers
Press Kit
Security
Pricing
Desktop App
Chrome Extension
Blog
Use Cases
Customer Stories
University
Help Center
Slack
GitHub
Google Drive
Asana
Okta
More
Culture & Values
Onboarding
Code Reviews
Postmortems
Team Meetings
More
Confluence Alternative
Google Docs Alternative
Notion Alternative
© 2023 Slab Inc.
TermsPrivacy